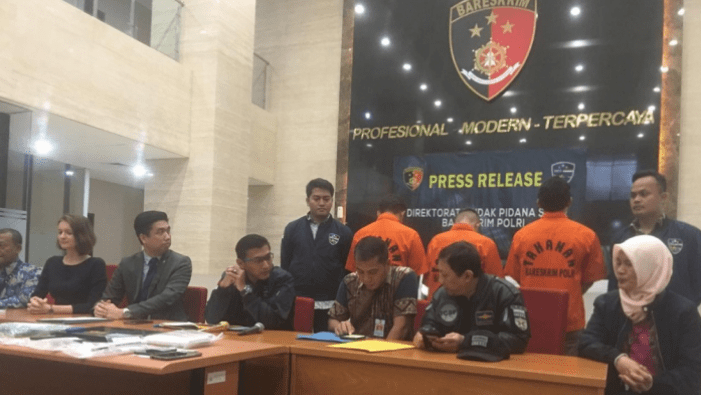 The Indonesian police announced on Friday that they have arrested three alleged Magecart hackers on December 20th. The suspects are from Jakarta and Yogyakarta and are 23, 26 and 35 years old. After the press conference, one suspect admitted on Indonesian television that he had injected web skimmers into ecommerce stores since 2017 and only made enough money to “buy a jacket”. The suspects face up to 10 years in prison under article 363 of the Indonesian Criminal Code.

The Indonesian police reported that this group had intercepted payments for 12 (mostly European) stores. The arrests carried out by Indonesian police were part of a coordinated Interpol anti-skimming campaign called Operation Night Fury with support from European and US cyberteams.

Sansec has been tracking the activity of this group for several years and has identified not 12 but 571 hacks by the same individuals. These hacks could be attributed because of an odd message that was left in all of the skimming code:

“Success gan !” translates to “Success bro” in Indonesian and has been present for years on all of their skimming infrastructure.

The hackers registered a range of domain names for their skimming operations, some of them clearly referring to their whereabouts or intentions. Here is a small sample:

Furthermore, we have observed similar hacks since the arrest at December 20th. The Indonesian police confirms that suspects from the same group are still at large, but would not disclose further details. As of today, we found 27 stores that are still being skimmed using the same code. Several exfiltration servers are still actively collecting intercepted payments, notably the brazen magecart.net domain.

This group had a serious impact on global ecommerce security in recent years, by skimming at least 571 hacked stores. However, they were responsible for just 1% of all Magecart incidents since 2017. Sansec estimates that there are yet another 40 to 50 more sophisticated individuals involved in web-skimming activity.

Sansec was the first to publish about web skimming and has been tracking global skimming activity since 2015. Our anti-skimming technology and fraud data are used by merchants, forensic investigators, financial anti-fraud teams and service providers.