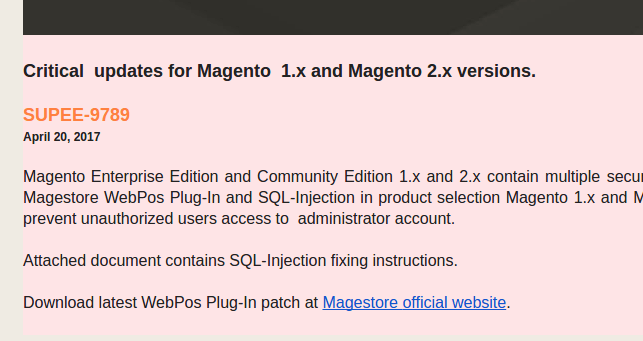 Update May 21st: a similar phishing mail circulates about a fake patch SUPEE-1798.

This week a mail was sent out to announce the new Magento patch SUPEE-9789. It is fake and it contains malware. There is no patch 9789. The message (full headers below) mimics an official Magento accouncement. It has two malicious payloads:

This specific malware is known to target POS systems, a.k.a. cash registers. Among other things, it will harvest payment data and passwords, and enslave the cash register into a botnet that can be used for DDoS attacks.

Curiously, the malware is hosted on a server of MageStore, a legitimate vendor of POS systems. It appears that MageStore runs a vulnerable version of ProFTPd which allows anyone to upload files to their server. Unfortunately, MageStore couldn’t be reached, and the malware is still on their server as of April 22nd.

Please get in touch if you have received this message as we are trying to establish the scope of intended targets. So far, we have received reports from extension vendors and hosting providers.

Thanks to Andrew Howden for additional research.